Gynecology and obstetrics are twin subjects that deal with the female reproductive system. While obstetrics deals with pregnancy and its associated procedures and complications, gynaecology involves treating women who are not pregnant. The field of obstetrics thus deals with the wellbeing of the pregnant mother as well as the delivery and healthy outcome. Obstetricians closely work with the paediatricians and neonatologists to deal with care of the newborn baby to reduce the chances of mortality and disease of the newborn. Obstetrics and gynaecology is concerned with the care of pregnant women, her unborn child and the management of diseases specific to women. The specialty combines medicine and surgery. This is a varied specialty, mostly dealing with healthy women, where they may have unexpected challenges in terms of their health on a daily basis. Work includes a large number of hands-on procedures, both in obstetrics and gynaecology. In gynaecology, patients range from those who have chronic disorders which are not life threatening (but interfere significantly with quality of life), to those where an acute emergency presentation is the first indication of a gynaecological problem.

In Vitro Fertilization (IVF) is a technique of assisted reproduction whereby a zygote is produced from the fertilization of sperm and oocytes outside the woman’s body, and allowed to proceed in its development under carefully controlled conditions, until it becomes an embryo. Thereafter it is transferred into the uterus, either by inserting it into the Fallopian tubes, but more recently by intra-vaginal placement into the uterus. If the embryo implants, a pregnancy has begun. If the pregnancy results in the birth of a live infant who is capable of surviving outside the mother’s body, a successful IVF cycle has taken place. Modern technology and advances in knowledge of the reproductive parameters is leading to increased success in both the pregnancy rates and live birth rates following IVF.

The Department of Obstetrics and Gynaecology in this hospital is successfully performing Team of treatment for NVD (Normal Vaginal Delivery), Lap Ovarian Cystectomy, Open and Laparoscopic Hysterectomy, Myomectomy, NDVH and IUI. 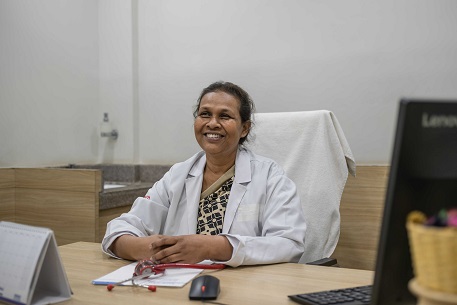